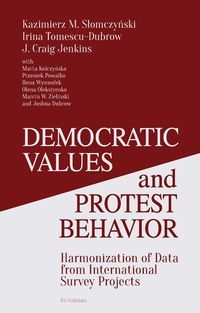 Brak w magazynie
Across the world, mass political protest has shaped the course of modern history. Building on decades of theory, we hypothesize that the extent and intensity of political protest is a function of micro-level democratic values and socio-demographics, country-level economic development and democratic practices, and the discrepancy (i.e. cross-level interaction) between a country’s democratic practices and peoples’ trust in key democratic institutions – that is, political parties, the justice system, and parliament. This book is a Technical Report on the logic of, and methodology for, creating a multi-year multi-country database needed for comparative research on political protest. It concerns both the selection and ex-post harmonization of survey information and the manner in which the multilevel structured data can be used in substantive analyses. The database we created contains information on more than two million people from 142 countries or territories, interviewed between the 1960s and 2013. It stores individual-level variables from 1,721 national surveys stemming from 22 well-known international survey projects, including the European Social Survey, the International Social Survey Programme, and the World Values Survey. We constructed comparable measures of peoples’ participation in demonstrations and signing petitions, their democratic values and socio-demographic characteristics. We complemented the harmonized individual-level data with macro-level measures of democracy, economic performance, and income inequality gathered from external sources. In the process, we pulled together three strands of survey methodology – on data quality, ex-post harmonization, and multilevel modeling. This book is funded by the (Polish) National Science Center under a three-year international cooperation grant for the Institute of Philosophy and Sociology of the Polish Academy of Sciences (IFiS PAN), and The Ohio State University (OSU) Mershon Center for International Security Studies (grant number: Harmonia-2012/06/M/HS6/00322).